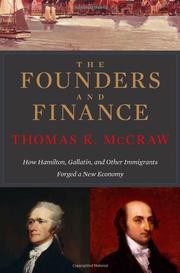 THE FOUNDERS AND FINANCE

How Hamilton, Gallatin, and Other Immigrants Forged a New Economy

The U.S. financial system was a creation of aliens—i.e., immigrants, who are numbered among the founding lights of the country.

If you think the current system is a mess, consider the national economy after the American Revolution. The country was broke after fighting Britain, and it had what Pulitzer Prize winner McCraw (Business History Emeritus/Harvard Business School; Prophet of Innovation: Joseph Schumpeter and Creative Destruction, 2007, etc.) notes was “the highest public debt it has ever experienced, measured against the income of its government.” For reasons that are not readily apparent, the new Americans were not adept at financial matters. In the first 50 years of nationhood, only six of 60 Cabinet members were foreign-born, and five of them were secretaries of the treasury. Two were Albert Gallatin and Alexander Hamilton; statues of both, McCraw notes, anchor the present treasury, next door to the White House. Hamilton, from St. Nevis, was a firm believer in federal power and an advocate of strong central-state solutions to various problems, including putting down rebellions of the sort that had been raised against the British crown. Gallatin, from Switzerland, was better born than Hamilton but ventured across the ocean because he “seemed to believe that Rousseau’s notions about the moral virtues of nature might be realized in the United States.” Hamilton was an urbanite and Gallatin a Daniel Boone of sorts, settling far beyond the Appalachians, but both introduced practices of banking, taxing and borrowing that were foundational. Further, because they were philosophically so different, they also introduced tensions that continue to be with us today, including the idea of taxation in the first place.

A welcome addition to business and financial history, illuminating little-known aspects of the early republic.