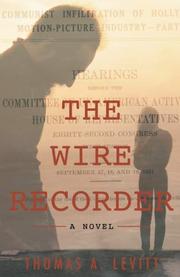 by Thomas A. Levitt

A love story explores the ramifications of McCarthyism during the Cold War.

In this debut novel, Larry Hearn is a Hollywood screenwriter with a promising future. But in 1951, the House Un-American Activities Committee subpoenas him as part of its frantic search for seditious Communists infiltrating the film industry in the United States. He refuses to sell out his peers and defiantly rebukes questions about his membership in the Communist Party, instead delivering a rousing defense of his First Amendment protections. Larry’s rebelliousness, though, costs him his career. In the aftermath of his testimony, he’s blacklisted within the movie industry and never quite recovers professionally. His daughter, Sophie, is deeply affected by his experience, and after some shiftless years in college, she becomes the director of a private but tuition-free elementary school she envisions as an alternative to its racist, classist competitors. She eventually meets Steve Elwood—they were actually friends as very young children—an aspiring filmmaker, whose father, Arthur, was also a screenwriter blacklisted for his political affiliations. Sophie and Steve slowly fall in love, but their blooming romance is threatened by a dark secret in his family’s past, one that forces both of them to confront the different political legacies they inherited from their fathers. Levitt’s story is a historically sensitive rendering of an ideologically tempestuous time, and he’s to be commended for an impressively evenhanded portrayal unencumbered by obvious partisan allegiances. The author powerfully captures the profound paranoia of the early ’50s—one of Sophie’s grade-school teacher’s ominously remarks: “There are Communists right here in our community, living amongst us, plotting against us. Look at the movie industry. Communists and their fellow travelers are making movies again, just like they were in the forties.” In addition, the book’s authenticity is largely the result of its characters, drawn with realistic emotional complexity. But the plot’s pace is far too languorous—Sophie’s meandering before she becomes a teacher is described at luxurious length. Still, this is a keen peek into a tumultuous time in American history.

A discerning historical analysis combined with an affecting romance.