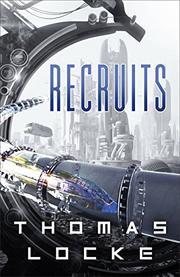 From the Recruits series, volume 1

Twins Dillon and Sean discover their childhood fantasy of an otherworldly train station is reality and their gateway to a new life in a galactic civilization.

The 17-year-old Raleigh-Durham white boys have been drawing the station for 10 years. When Col. Carver, a battle-scarred, brown-skinned new neighbor, shows them how to travel there using a magical force within themselves, the duo’s eager to pass his tests and train to use their powers. However, Earth’s a seldom-visited outpost planet in the Human Assembly; and the test administrator, a black man named Tirian, is set against their passing any tests. Although the boys are attacked twice by inimical forces, Carver and his superiors don’t believe the boys’ account of events because of what it means to interplanetary peace; they blame Tirian, who becomes a wanted man. Though the boys are much older and more powerful than the other students, they enter the school formerly administered by Tirian to train, prove their story, and clear their former adversary’s name. Though marketed as sci-fi, Locke’s trilogy-starter is more fantasy the likes of the early Pern novels by Anne McCaffrey. Science is supplanted by a magical faith/force (though the faith is not necessarily Christian). Though the plot is slow and logically muddy at times, the twins’ banter feels real, and these sparks carry the tale of good vs. evil to a successful, if a bit anticlimactic, close.

Harry Potter and Star Wars tossed in a blender: it’s not particularly fresh or innovative, but it’s a passable enough second-tier purchase.