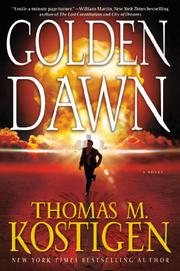 Reporter Michael Shea’s tracking his uncle, a former IRA bomb maker, and he’s not surprised to find him in Iran with a Cechnyan rebel negotiating to build a trigger for a zealot’s nuclear weapon.

Kostigen’s (The Green Book, 2007) debut fiction is headline-driven, with a touch of mysticism added. Shea's tracked his nefarious uncle to Lake Urmia near the Turkish border where the bomb maker’s meeting with Mahmoud Talib, Iran’s rogue president. Talib is convinced he is the Mahdi, an Islamic redeemer meant to save the world, but Talib needs an ancient Zoroastrian text to prove it. And a bomb to persuade the world. The nonstop action begins immediately when Shea is ambushed while spying on the clandestine meeting. Shea escapes and inadvertently takes refuge in an apartment where beautiful widow Neda Ghazali is imprisoned. Neda’s assassinated archaeologist husband discovered the Zoroastrian text, the Zand-i Vohuman Yasht. Because Neda is a member of the Golden Dawn, a Zoroastrian sect charged with finding and protecting the true Mahdi, she’s also in danger of being killed. Shea and Neda escape to the ancient village of Shiz, trailed by Zhubin, ruthless agent of SAVAMA, the Iranian Gestapo, but Zhubin’s formidable skills are routinely matched by Shea’s krav maga training. There are dead bodies left behind, friend and foe, as Kostigen moves the action from Iran to Turkey to Chechnya to Italy to Belfast, but there’s time for Shea and Neda to end up in bed, where sex is transformed into the spiritual. The complicated back story links Talib to Mesbah Yavari, pederast leader of a fundamentalist seminary, imams and ayatollahs in Iran’s Haghani Circle and the Assembly of Experts, all while also referencing Sufi mysticism and John Paul II and the Third Secret of Fatima. Kostigen’s plain-Jane, reporter-style prose hits the pages slam-bang, with sometimes as few as three paragraphs to a chapter right up to a double-twist conclusion.

Think The Da Vinci Code with religious fanatics eager to light off an atomic weapon.