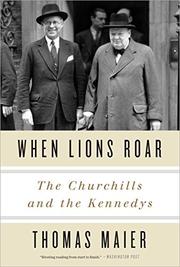 The Churchills and the Kennedys

Journalist Maier (Masters of Sex: The Life and Times of William Masters and Virginia Johnson, the Couple Who Taught America How to Love, 2009, etc.) pieces together a multigenerational saga of two renowned families.

Writing a biography of an individual can become beset with difficulties. Writing a multicharacter history of both the Churchills and the Kennedys, covering primarily the 1930s through the 1960s, involves an almost unimaginably high degree of difficulty. Maier's cast of characters includes 14 Churchill family members and 15 Kennedy family members. As chronicled by the author, Winston Churchill, the British prime minister who led his empire through World War II, is without question the dominant figure within his family tree. Joseph P. Kennedy, the father of President John F. Kennedy, is less dominant but a formidable presence nonetheless. Churchill's wife, Clementine, and Joseph's wife, Rose, receive meaningful supporting roles, as do the Churchills' son Randolph and three of the nine Kennedy children (Joseph Junior, JFK and Kathleen). Beginning in the early 1930s, the connections between the two families grew increasingly complex, especially after Joseph became the American ambassador to the U.K., appointed by Franklin Roosevelt. Unsurprisingly, Maier portrays Winston Churchill as a highly educated man of letters who sometimes slipped into despair. He portrays Joseph as a scoundrel in business and a womanizer but someone who demonstrated intense devotion to his children. Perhaps most pleasing is Maier's skill at locating information about less famous individuals who played key roles in the ways the two families connected and disconnected. The most intriguing connecting character is Kay Halle, a writer/socialite who worked her way into the inner circles of both the Kennedys and the Churchills.

As this thick book jumps back and forth between the two families, Maier sometimes strains to link all the words and deeds, but his research carries the book along as interesting anecdotes continue to emerge.