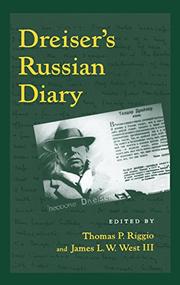 Notes on Theodore Dreiser's two-month 192728 tour of the Soviet Union that provided the material for the book Dreiser Looks at Russia (1928). Its title notwithstanding, much of this ``diary'' was penned by American-born Ruth Epperson Kennell, then living in Russia. As Dreiser's secretary (and lover), she kept notes that Dreiser reviewed and annotated at the time, and later edited. Together, they describe visits to places as varied as the Hermitage, the State Circus, the Czar's Village (``the worst palace I have ever seen,'' says Kennell in Dreiser's voice), a candy factory, an ``electro- mechanical'' plant, and a coal mine. In addition to chatting with Communist bureaucrats (questioned with terrier-like tenacity, as he tries to expose failings in the system), Dreiser converses with people ranging from Sergei Eisenstein and Konstantin Stanislavski to a woman who, mistaking the author and his entourage for an inspection commission, complains of dampness in her walls. Although Kennell includes comments to please people at VOKS (the government cultural agency to whom, without telling Dreiser, she supplied a duplicate of most of her portion of the diary), much here will be interesting to scholars—particularly when read in conjunction with Dreiser's 1928 volume and with Kennell's own book on the trip. En route to Russia, Dreiser speculates that after a revolution ``the miraculous will become the real,'' and, indeed, he is determined to see the ``real'' Russia. At times, perhaps, the experiences become a bit too real, as Dreiser grouses about unreliable trains, mediocre food, and seemingly ever-present filth. By the end of the tour he has seen enough reality to say (per Kennell-Dreiser), ``My one desire is to get out of here as quickly as possible and back to America.'' The editors, Riggio (English/Univ. of Connecticut) and West (English/Pennsylvania State Univ.), have prepared a volume that is primarily for those interested in Dreiser or in the USSR of the 1920s.