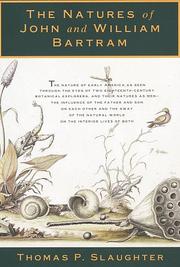 THE NATURES OF JOHN AND WILLIAM BARTRAM

A fine exploration of the history of natural history, focusing on the Bartrams of Pennsylvania, father and son. Historian Slaughter (Rutgers Univ.; Bloody Dawn, 1991) takes as his subjects two men whose contributions to the growth of American natural science are inestimable. They could not have been less alike, Slaughter notes. John (16991777), ``the first native-born American to devote his entire life to the study of nature,'' was the eminently practical and business-like scientist, given to taxonomic exactitude and rigorous description; it was he, Slaughter relates, who first identified the Venus flytrap, noting its characteristics with almost prurient attention. He courted public recognition, and regularly issued opinions on matters of the day, especially the ``Indian problem'' (``they skip from tree to tree like monkeys,'' John wrote) and the education of slaves (which he opposed). For all his faults, Slaughter notes, John Bartram was responsible for describing hundreds of species of plants and animals, fully ``one quarter of all the plants identified and sent to Europe during the colonial period.'' Perhaps in rebellion against his tight-laced father, William (17391823), a retiring man who repeatedly failed at business, tended toward a poetic, dramatic view of nature—-and Slaughter maintains that William's famous book, The Travels, is somewhat untrustworthy as a result. Yet William's homespun, slightly naive view of nature is the one that carried the day over his father's more rigorous approach. Slaughter persuasively argues that Henry David Thoreau, long thought to be sui generis, should instead be viewed as an heir of William Bartram's, and he notes the influence William had on the English Romantics, especially Coleridge. Slaughter suggests as well that to William can be traced the entire tradition of homegrown writing about natural history, as practiced today by the likes of Barry Lopez and Terry Tempest Williams. An invigorating, accessible contribution to the study of early American science.