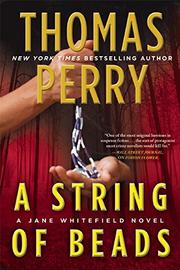 A STRING OF BEADS

No request that comes from the eight clan mothers of the Tonawanda Seneca clan in which Jane grew up can be denied. So Jane doesn’t hesitate to leave her long-suffering husband to search for her childhood friend Jimmy Sanders, who punched a drunk who took a swing at him in an Akron bar and then found the cops building a homicide case against him when the drunk, Nick Bauermeister, was shot dead in the home he shared with his girlfriend, Chelsea Schnell. Jimmy makes it easy for Jane to find him—everything in this installment is unexpectedly easy—but soon enough, they’re predictably on the run together. The only thing that’s not predictable is the reason why. Nick, it turns out, didn’t just work for Daniel Crane’s Box Farm Personal Storage facility; he worked for Dan as a thief, and Dan, who killed him in the hope of securing Chelsea’s favors himself, turns out to be seriously connected to people who are even more seriously connected. The upshot is that it’s not just the law that’s looking for Jimmy; an awful lot of conscientious, well-armed professionals are involved as well, some of them employees of mob uber-boss Lorenzo Malconi, some of them on loan by associates eager to do Malconi a favor. Oddly, Jane and Jimmy (and later Chelsea) never seem to be squeezed, as you’d expect, between the cops and robbers looking for them; instead, it’s the bad guys who are squeezed between Technical Sgt. Isaac Lloyd, of the New York State Police, and Jane herself, whose best defense is often a good offense.

Perry (The Boyfriend, 2013, etc.) supplies twists and thrills aplenty, but it’s hard to feel the suffocating kind of suspense that’s his stock in trade when the pursuers seem to be in more danger than the pursued.