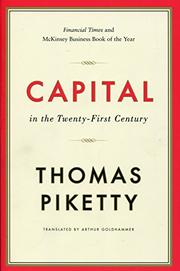 CAPITAL IN THE TWENTY-FIRST CENTURY

Economist Piketty considers capital, in the monetary sense, from the vantage of what he considers the capital of the world, namely Paris; at times, his discussions of how capital works, and especially public capital, befit Locke-ian France and not Hobbesian America, a source of some controversy in the wide discussion surrounding his book. At heart, though, his argument turns on well-founded economic principles, notably r > g, meaning that the “rate of return on capital significantly exceeds the growth rate of the economy,” in Piketty’s gloss. It logically follows that when such conditions prevail, then wealth will accumulate in a few hands faster than it can be broadly distributed. By the author’s reckoning, the United States is one of the leading nations in the “high inequality” camp, though it was not always so. In the colonial era, Piketty likens the inequality quotient in New England to be about that of Scandinavia today, with few abject poor and few mega-rich. The difference is that the rich now—who are mostly the “supermanagers” of business rather than the “superstars” of sports and entertainment—have surrounded themselves with political shields that keep them safe from the specter of paying more in taxes and adding to the fund of public wealth. The author’s data is unassailable. His policy recommendations are considerably more controversial, including his call for a global tax on wealth. From start to finish, the discussion is written in plainspoken prose that, though punctuated by formulas, also draws on a wide range of cultural references.

Essential reading for citizens of the here and now. Other economists should marvel at how that plain language can be put to work explaining the most complex of ideas, foremost among them the fact that economic inequality is at an all-time high—and is only bound to grow worse.