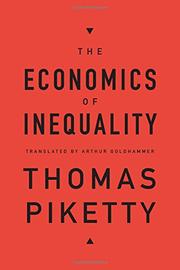 THE ECONOMICS OF INEQUALITY

In a work that is aligned with but antecedent to his grand synthesis, Capital in the Twenty-First Century (2013), French economist Piketty examines the structural causes of inequality.

Capital and income are intertwined, of course, and unevenly distributed. Just how unevenly has been a subject of much economic-historical work lately. In this book, published in 1997 and updated here and there since, Piketty observes that he does not “take fully into account the results of the past fifteen years of international research on the historical dynamics of inequality,” but the eternal verities hold. As the author writes, in a moment worthy of Marx, “the question of inequality and redistribution is central to political conflict.” Redistribute broadly and equitably, and you have the possibility of social justice; redistribute into the hands of the wealthy, and you risk turmoil and revolution when the have-nots catch on to what’s going on. Piketty’s argument is more descriptive than prescriptive; he notes that capital income, for instance, is subject to more unequal distribution than wage income, which makes good sense inasmuch as the rich tend to live on capital gains instead of salaries. The writing tends to be white paper–ish and technical (“in the United States…the P90/P10 ratio for income rose from 4.9 to 5.9 between 1979 and 1986”), and although training in economics isn’t strictly necessary in order to follow the author’s argument, it certainly wouldn’t hurt in tracking such concepts as the relative elasticity or inelasticity of capital and, particularly, human capital. The latter contributes strongly to Piketty’s case, which ends with a consideration of how Keynesian stimuli can influence long-term redistribution, if at all.

Not for the numerically faint of heart, and those who are numerate may argue at points—just as Piketty’s masterwork has inspired controversy. Still, a discussion worth having and a book worth reading.