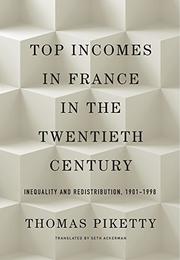 TOP INCOMES IN FRANCE IN THE TWENTIETH CENTURY

“In general…it is a healthy thing to show inequality as it exists”: a door-stopping work of economic history that does just that.

Opinion-shaking economist Piketty (Paris School of Economics) burst onto the English-reading scene in 2014 with his blockbuster book Capital in the Twenty-First Century. This predecessor volume, published in France in 2001, offers and interprets the body of evidence on which much of his argument was founded. He shows, for example, that economic inequality narrows in times of crisis and war, in some cases because states become more vigorous in collecting taxes when the coffers are empty. So it was in France in the 20th century, when incomes overall followed a non-American pattern, with greater divergence in times of peace and a lessening of gaps among the classes. As Piketty follows, exhaustively, tax records and other documents to construct a portrait of the French economy, he discerns patterns that he explicates in prose—but just as often in the form of tables, which are abundant throughout the book; fully half of the tome is given over to data-clotted appendices and other backmatter. Piketty’s prose is generally nontechnical, as when he writes, “in capitalist societies, ownership of the means of production…has always been the surest path to the possibility of attaining a very high income.” So how does one become an owner? Not just through acquiring the keys to the factory, but through stock ownership, which “helps to explain why large fortunes are usually made up of stocks.” Understanding tax regimes helps one understand the inner workings of an economy, as it is clear to see through the work, and the beneficiaries are therefore reluctant to see their tax records made public, a lesson that will not be lost on American readers living under the hyperactive inequality of the here and now.

Innumerate readers need not apply, but this book is still an essential document in following the Pikettian argument developed in later books.