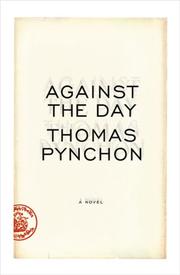 History and its discontents figure as prominently in Thomas Pynchon's formidably brainy novels as do most of the sciences and pseudo-sciences.  He entered our consciousness as a learned hipster almost immediately, in the early story "Entropy," a phlegmatic consideration of the heat death of the universe, and in the ironic epic V (1963), a tale of parallel searches for a mysterious woman whose despairing momentum is mitigated by the stoical mantra "Keep cool, but care."

The combination of a rationalist's fatalism with a romantic's reverence for human creativity and resilience took brilliant form in a trim fable of conspiracy and disinformation linked to an "underground" postal system (The Crying of Lot 49, 1965); the massive Melvillean Gravity's Rainbow (1973), in which the science of modem warfare walks arm in arm with Armageddon; and the fetching fictional contrast between two legendary surveyors' efforts to map a new world and the redirection of scientific and technical innovations to serve agendas of conquest and exploitation (Mason & Dixon, 1997).             Pynchon now blends the yeasty period style of his most recent novel with the encyclopedic chutzpah of Gravity's Rainbow as he reaches back to the late-19th century and the origins of the first global götterdämmerung to be designated a World War.  Its array of parallel plots begins in the air, aboard a "hydrogen skyship" carrying an aeronautics club, the Chums of Chance (whose adventures inspire a series of dime novels), toward Chicago and the 1893 World's Columbian Exposition.  The image of adventurous progress thus created is then systematically dismantled by a series of ventures into increasingly dangerous territories.  Colorado miner Weeb Traverse opposes perceived injustice with acts of anarchy (which soon looms as the very Spirit of the Age), initiating a pattern of exile and antagonism that will engulf all his loved ones.  Weeb's son Kit, Yale-educated and severed from his roots, travels compulsively, moving across continents and through successive zones of conflict, into the heart of his deepest longings and fears.             Dozens of other characters – adventurers, spies, research scientists, disoriented celebrities and dedicated agents of the 20th century's culture of death – meet, recombine and redefine themselves. Revolutions break out in Russia and Mexico; ultimate weapons are built and deployed; and natural disasters (such as the 1908 explosion of a comet above the Siberian wasteland) eerily increase and multiply.

Pynchon is both wordsmith and world-smith. He's Dickens with degrees in chemistry and mathematics, Dostoevsky with a fondness for dumb jokes and awful puns, Faulkner with an even more pronounced apocalyptic imagination.  Master of the knowledge he has acquired and the worlds he surveys, he challenges us to envision with him an opaque and threatening future, while mourning perversions of humanity's accomplishments and aspirations, fearing the worst, and laughing all the way.