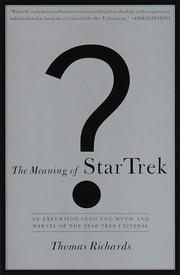 THE MEANING OF STAR TREK

For all those Trekkies who—even after repeatedly watching hundreds of episodes of Star Trek and its sequels—still haven't got the show figured out, this book just might do the trick. Despite his dubious claim that no other books have tried to catalog the meanings of Star Trek, novelist Richards (Zero Tolerance, 1996, etc.) does a sound job of mining broad themes, attitudes, and implications from the various Trek series. Perhaps because it lasted many seasons longer than any of the others—and preferred metaphysical speculation and diplomacy over Captain Kirkstyle fisticuffs with aliens—Star Trek: The Next Generation provides most of Richards's material. A former Harvard English professor, Richards usually manages to keep his deconstructionism dumbed down to a level accessible to teenage sci-fi fans (although he often seems to be pining for the Elysian fields of lit-crit academic discourse). While the general tendency in myth is toward tragedy, this is not the case with Star Trek, which is motivated, he asserts, by ``essentially comic visions emphasizing the triumph of the hero, the flourishing of civilization, and the importance of all action.'' No doubt the usually sunny, comic vision of commercial television is also responsible, but this is the kind of analysis Richards shies away from. He is concerned with the ``what,'' not the ``why,'' mooting almost any discussion of the nonhermeneutical meanings of Star Trek. Thus, there is nothing, for example, on why the Federation's benign variant of expansionism/imperialism looks a lot like a sci-fi version of the ``Great Society.'' Within the ``text'' of the show, however, Richards's analysis is excellent and covers everything from theology to the emphasis on individualism that lies at the very heart of the Star Trek universe. Though this isn't exactly rocket science, Richards does a fine job with the material at hand. If only he'd boldly dared to go a little further.