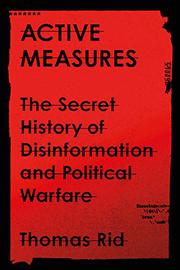 The Secret History of Disinformation and Political Warfare

Rid, whose previous book, Rise of the Machines, focused on cybernetics, opens in 2016, as the Russians were employing disinformation to influence the American presidential election, and then moves back in time to offer a well-packed history beginning in the 1920s. “This modern era of disinformation,” he writes, “began in the early 1920s, and the art and science of what the CIA once called ‘political warfare’ grew and changed in four big waves, each a generation apart.” The first wave occurred as the widespread access to radio offered an effective new technology for enemy governments hoping to influence listeners to revolt against their own governments. The second wave occurred during the Cold War, with the CIA as the main culprit. The third wave encompassed the 1970s, with a massively funded Soviet bureaucracy as the main culprit. The fourth wave has extended into the present, with labyrinthine government spy bureaucracies losing ground to renegade computer hackers operating 24/7. While the digital era in general and the internet in particular have altered the tactics of government spy agencies, the author demonstrates in massive detail how such destabilization has flowed in multiple directions for the past century. The U.S. government, mostly through the CIA, has mounted countless campaigns to harm so-called communist nations, especially during the post–World War II era. On the communist side, Rid emphasizes the relentless disinformation campaigns emanating from the Soviet Union/Russia as well as from East Germany before its reunification with West Germany. The chronological narrative will demand significant effort from lay readers—not due to lack of clarity by the author, whose style is engaging, but because every extended case study requires separating partial truths told by the spy agency from the vast untruths that are necessarily part of the mix. For readers interested in current politics, Rid offers expert opinion that Russia is actively working to erode the foundation of U.S. democracy.

A dense but highly relevant and useful study, especially as we approach the 2020 election.