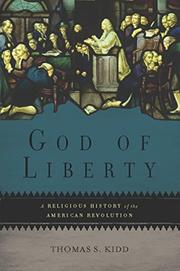 A Religious History of the American Revolution

Intriguing look at the role played by faith in America’s movement for independence.

Though books about the faith lives of America’s founders are abundant, Kidd (History/Baylor; The Great Awakening: The Roots of Evangelical Christianity in Colonial America, 2007, etc.) finds a useful niche by exploring how religion affected the American Revolution itself. Without the various roles and uses of religion, the revolution would have gone quite differently, if it would have come about at all. The author points to two disparate precursors of the independence movement: the Great Awakening of the 1730s and ’40s and the Seven Years’ War (1756–’63). He describes the Great Awakening as the “first American revolution,” as it began an overthrow of traditional church-state relationships. Through the Awakening, state-supported churches came under severe attack as lay preachers rose up and dissenting churches became ever more popular. As state-supported churches lost power and prestige, so too did the colonial structures behind them. This was a movement that would carry on past the revolution. Kidd writes that “for religion in America, disestablishment would prove to be the most significant political outcome of the Revolution.” The Seven Years’ War expanded religious sentiment in the colonies, stirring up an anti-Catholic hatred that was used with surprising effect against the British monarchy. The war also instilled an apocalyptic viewpoint among many colonists, which was easily turned against their occupiers. The author also discusses the importance of virtue to the founders and its role in establishing the nascent federal government, and examines other aspects of faith, including chaplains in the war effort and ethical arguments over slavery. Kidd ends fittingly with a look at Tocqueville, who was the first, and perhaps best, observer of American history in comprehending the role of faith in the creation of the American experiment.