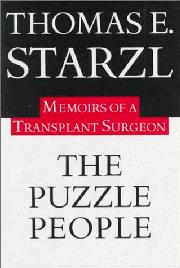 Memoirs of a Transplant Surgeon

An innovative transplant surgeon looks back on a long and brilliant career. Starzl's ``puzzle people'' are not only the patients whose acquisitions of new organs have profoundly altered both their bodies and their minds, but also the physicians whose lives have been changed by participating in the process. Here, the author, who no longer performs surgery but still directs the Transplantation Institute at the Univ. of Pittsburgh, probes- -albeit gingerly—at the puzzle of his own life. He draws a vivid portrait of his father, but other family members remain shadows, and he never lets us very far inside his own psyche. In rapid succession, his wife leaves him, his father and sister die, and his son suffers an emotional breakdown; these events must have been devastating, yet, on the page, Starzl's expression of pain is carefully controlled. And so is his recounting of other significant events—career shifts, professional frustrations and triumphs, a new marriage to an abused black woman, and his own heart surgeries. Throughout, the author seems most intent on setting the record straight, generously crediting those whose work helped shape his own, praising those who carry it on, and excusing those who hampered it. Individual patients are mentioned from time to time, and although Starzl clearly cares about them, he avoids sentimentality in telling their tales. Clearly having thought long and hard about the doctor-patient relationship and the place of expensive technology in our financially troubled health-care system, he voices his concerns about patients' rights and the ethical dilemmas posed by obligatory randomized drug- testing. Not an intimate self-portrait but a well-crafted glimpse into a world of science where politics and personalities often clash. (Twenty b&w photos, ten line drawings—not seen.)