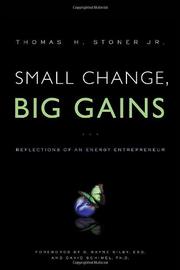 Reflections of an Energy Entrepreneur

Debut author Stoner provides an in-depth look at climate change and the world’s energy use, offering bold, new policies that could save the planet and the global economy.

Drawing on more than 25 years’ experience as an energy company executive and capital formation expert, Stoner displays a wide-ranging grasp of the political, economic, historical and scientific issues surrounding climate change and energy policy. He maintains that rising global temperatures and sea levels and escalating superstorms such as Katrina and Sandy present an existential threat to human survival rivaling previous threats such as nuclear proliferation. Stoner avoids debate about the science of climate change and whether it’s man-made; instead, he takes a pragmatic approach, suggesting that determining the best forms of renewable energy for a healthy environment is essentially a business problem. And, like all business proposals, it’s essential that the interests of all the stakeholders are met—in this case, lender, supplier, user and environmental steward. Stoner contends that a market-based approach will lead to inexhaustible energy supplies, a better environment and a thriving economy. Using forecasts created by Project Butterfly, his not-for-profit clean-energy enterprise, Stoner establishes a worthwhile business goal for this century: “[I]f we can keep atmospheric CO2 concentration below 550 ppm, the Project Butterfly Financial Model forecasts that the increase in average global temperatures will slightly exceed 3.6 degrees Fahrenheit (2 degrees Celsius), a situation to which humans may still be able to adapt.” But how? He advocates using natural gas as a transitional energy source and promoting voluntary carbon credit exchanges. However, his primary recommendation is carbon taxes, for which he advocates using what could become the next political slogan: “[T]ax what you burn, not what you earn.” Although the material reads at times like a textbook, the author’s references to his family lend a personal feel, and interesting historical side notes—about topics such as the failure of Solyndra, rural electrification under FDR and the rise of nuclear power—also help enliven the text. His ideas are well-supported with extensive citations found in the endnotes, and dozens of charts effectively explain the complex data behind climate change and energy use.

A thoughtful contribution to the climate change debate, with a unique, businesscentric approach to setting energy and environmental policies.