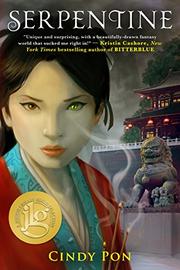 Pon returns to Xia, a realm inspired by Chinese folklore and introduced in Silver Phoenix (2009), for the first in a duology.

Abandoned at birth, Skybright feels lucky to be handmaid to the wealthy, vivacious Zhen Ni, who for 16 years has treated her more as beloved sister than servant. Yet Sky, already bitter with jealousy over her mistress’s new companion and passionately enamored of the charming monk-in-training Kai Sen, hides a dreadful secret: at night, she transforms into a demon, half human, half monstrous crimson serpent. As Sky learns more about her extraordinary origins from the enigmatic immortal Stone, she realizes that the breach between the underworld and the land of the living endangers everything she holds dear. The economical narrative conjures an entire world, drenched in color and texture and scent, rich in evocative mythology and heady action, and filled with vivid characters. Skybright makes a refreshing heroine, both fiercely loyal and eminently practical, ready to exploit her supernatural powers while insisting on her inherent humanity. Her steamy, nigh-instantaneous (and eventually consummated) romance with Kai Sen still appears intimate and tender, even as her unwilling attraction to Stone suggests a classic love triangle. But the dominant theme remains her deep friendship with Zhen Ni, with all its complications of class, amorous entanglements, and imminent demon invasion.

A fast-paced and engrossing read for anyone weary of the same old hackneyed storylines. (Fantasy. 14 & up)

WHERE THE MOUNTAIN MEETS THE MOON
by Grace Lin
Fiction

STRONGER THAN A BRONZE DRAGON
by Mary Fan
Children

GIRLS OF PAPER AND FIRE
by Natasha Ngan
Newsletter sign-up