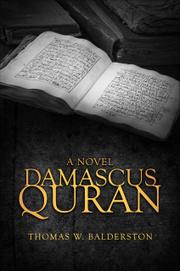 This sprawling historical novel has an explosive concept at its heart: the discovery of an ancient, alternative Quran.
Balderston’s (The Proven God, 2011) latest book begins in fairly familiar Da Vinci Code territory: Bobby Johnson and Grace Richards are working on the renovation of an old church named Trinity when they discover a crypt and hints of an ancient library on the premises. They learn that the building is owned by a shadowy organization called the Alpha and Omega Society for the Preservation of Truth. For decades, the society has boarded up the library rather than allow its books to incite the world’s anger and rejection—particularly The Wonder of Terra by Father John “Poggio” Dolan, who’d been a part of the society for years but has since retired to Colorado. In order to understand The Wonder, Bobby, Grace and the head of the society jet off to see Dolan, who has a bombshell for them all: Years before, he bought an old manuscript he thought was an ancient Quran, until Ali Malek, a Lebanese friend of his, studied the manuscript and was astonished to discover that it wasn’t a Quran. Rather, it was some kind of alternate Islamic text every bit as old as the Muslim holy book but radically different in several key ways that, if verified and published, would be revolutionary. They anticipate the outrage of the ulema, the scholars of Islam, who’ll cite the relevant passages from the Quran utterly forbidding additions and alterations, let alone wholesale revisions. This alternate Quran could provoke “a battle for control of the Muslim world.” Balderston varies these present-day theological tensions with extensive, well-realized historical segments dramatizing the book’s long history. However, the vibrancy of this history might lead conservative sects to a simple solution: “It was a book that needed to be destroyed.” Balderston skillfully balances these separate strands, blending the past and the present in a potent mixture that will please all but the most religiously zealous readers.
A textured, intriguing novel about a world-changing holy book.