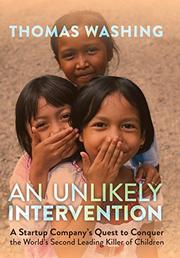 An entrepreneur’s account of a spirited mission to curb infant deaths in underdeveloped, poverty-stricken nations.

Veteran Colorado venture capitalist Washing (co-author: Passion for Skiing, 2011) first heard of life-science company PanTheryx’s global health initiative from a business acquaintance in 2010. He’d invested in the work of the company’s founder, entrepreneur, and inventor Tim Starzl, years before. Starzl developed a revolutionary, powdered treatment called DiaResQ, designed to halt acute, infectious diarrhea in young children. The grim statistics regarding this malady that Washing provides in this book are startling and distressing; it’s mostly just a nuisance for young children in the developed world, but it kills about 2,200 kids each day in other regions, caused by ingestion of contaminated food and water. The author writes passionately about the potential for saving these children’s lives in this inspired and fulfilling chronicle of humanitarianism and good will. Washing begins by familiarizing readers with PanTheryx founder Starzl’s history and corporate experience, beginning with the iconoclastic legacy of the inventor’s father, Tom Starzl, who was a pioneer in immunological disease prevention. Together with his wife, Bimla, the younger Starzl visited India and witnessed firsthand the “perplexing mixture of physical, cultural, and environmental factors at play in making pediatric diarrhea so pernicious in the developing world.” The discovery, development, clinical testing, and eventual marketing of his radical, broad-spectrum, immunotherapeutic powdered food product would take time, patience, and essential angel funding from Washing, his firm Sequel Venture Partners, and other investors. In this work, which also serves as a promotional vehicle for DiaResQ, Washing describes how his initial interest in the project bloomed. Readers who are interested in the mechanics and financial intricacies of startup health care-business investment will find the insider information in this book to be informative and encouraging. Washing’s overall scrutiny of the “witches’ brew of technical expertise, managerial skill, capital, and entrepreneurial culture” proves to be engrossing throughout. Washing also contributes specific commentary on the inner workings of investor partnerships—how they’re initiated, nurtured, and (hopefully) made lucrative. Readers who have more interest in the medical aspects of the project will be satisfied by a statistics-rich chapter on the lethal effects of infectious diarrhea-causing rotavirus in underdeveloped countries, and how PanTheryx’s bovine colostrum-based product functions in the bodies of ailing, immunocompromised children. He delves further into the issues at hand by offering a cross section of other available treatments and solutions and their availability in impoverished nations—research that will likely be both compelling and alarming to readers who live in wealthier nations. Washing also reveals that the development process, as a whole, wasn’t an easy one; as the efficacy of PanTheryx’s therapy became known, he says, regulatory red tape hindered the ability of the company to dispense and sell DiaResQ. Ultimately, by encouraging entrepreneurs and startup founders to “do well by doing good,” Washing’s narrative will instruct readers on how to best channel skills and enthusiasm toward altruistic goals.

An informative look at a promising method for saving children’s lives in underdeveloped regions of the world.