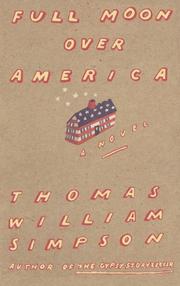 Once again, Simpson (The Gypsy Storyteller, 1993, etc.) takes a popular form—previously the family dynasty saga, here the political biography—and tweaks it to produce giggles but few belly laughs. The novel opens on January 20, 2001, with political reporter Jack Steel standing outside of the rustic island home of 32-year- old president-elect William Conrad Brant MacKenzie. Steel explains ``into the camera'' that there are several controversial factors surrounding MacKenzie's election and promises to delve into the background of ``The Last Innocent Man in America.'' What follows is a mix of reporting on MacKenzie's family background (beginning with his foul-mouthed fat-cat great-grandfather, who once sent a postcard from New Zealand reading, ``I have come halfway around the world...Big fucking deal'') and excerpts from the journals that MacKenzie has kept since he was 10, as well as the occasional exchange between Steel and his subject. Simpson perfectly re- creates the tone of modern, and presumably future, television journalism; his Steel both takes an overly familiar air and insists that he has played no part in the story itself, which turns out to be patently untrue. MacKenzie, however, is never clearly rendered and resembles various political figures at different points in the book. He is alternately portrayed as a political blank slate (Quayle); a wealthy family's son (Bush); a loose cannon running on an independent ticket (Perot); and the author of a book on the environment (Gore). His journals also reveal his single-minded devotion to his now-deceased wife, Dawn, and a childhood friend notes that she expected Dawn, not her husband, to be president some day (guess who). Clearly this slippery hold on MacKenzie's personality is meant to reveal something about the intersection of politics and journalism, but it reveals nothing interesting and instead weakens the satire. Original concepts that fizzle, from an author whose best work is probably still to come.