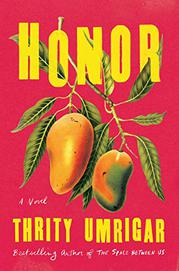 An Indian woman who's spent most of her life in the United States develops a bond with a woman in rural India who's been subjected to appalling violence.

Returning to the topic of India’s evolution, Umrigar delivers the discussion through the admittedly biased perspective of Indian-born, U.S.–raised journalist Smita Agarwal. Immigrating with her family to Ohio at age 14, Smita “had vowed never to step foot into India again,” for reasons revealed only late in the book. But then her friend Shannon, the South Asia correspondent for her newspaper, breaks her hip, and Smita, who's vacationing nearby, flies into Mumbai to support her in the hospital. Shannon's injury has forced her to abandon an important story that fits Smita’s beat of gender issues, and Smita now finds herself taking on the assignment, one which will force her to deal “with everything that she detested about this country—its treatment of women, its religious strife, its conservatism.” All these unpleasant traits and more are encapsulated in the tale of Meena Mustafa, a Hindu village girl whose scandalous work in a factory, marriage to Abdul, a Muslim, and pregnancy affront her two brothers, who respond violently “to protect the honor of all Hindus.” They burn Abdul alive, leaving Meena surviving but badly disfigured. Umrigar’s juxtaposition of urban norms with the archaic, impoverished rural hinterland, as well as Abdul’s dreams of himself and Meena as a modern, integrated couple, delivers a clear message but a starkly delineated one, its allegorical quality intensified by one-dimensional supporting characters. The horror and Meena’s intense suffering also contrast uneasily with a late love story for Smita—“He was the best of what India had to offer”—and some binary, not always plausible choices.