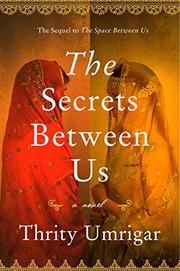 THE SECRETS BETWEEN US

Two elderly Indian women—one poor, the other poorer still—move beyond mutual suspicion to forge a bond, start a business, and, even this late in life, absorb change.

A new marble shopping mall is attacked; an old brothel, scene of terror and enslavement, is replaced by a gleaming high-rise. The profound impact of modernity on India is greeted variously with violence, a measure of relief, and significant shifts in attitude by the characters in Umrigar’s (Everybody’s Son, 2017, etc.) eighth novel, a sequel to The Space Between Us. A more traditional storyteller than Neel Mukherjee, whose recent A State of Freedom also considered seismic social shifts in this immense nation, Umrigar chooses to reflect new India via a pair of aging female characters whose lives of struggle and suffering have not delivered an easeful old age. Bhima is working two cleaning jobs to enable her granddaughter Maya to complete the college course which will, Bhima hopes, lift both of them out of poverty. Parvati, the survivor of an even harsher youth and an abusive marriage, is homeless and ill but still equipped with street savvy and a propulsive, bitter anger. Reluctantly, the pair—living proof that “being a poor woman…is the toughest job in the world”—pool their entrepreneurial talents to start a produce stall, while slowly opening up to each other. Umrigar’s depictions of Mumbai’s chaotic slums and pitiless streets are vivid; her events and moral lessons—Bhima will overcome her own prejudices to love and appreciate a kindly lesbian duo; Parvati will acknowledge that behind her stalwart front she is lonely—are more broadly delineated. These plot predictabilities weaken a female-centered story framed by oppressive masculinity, but its poignancy and descriptive strength help redress the balance.

A lengthy but affecting tale of late sisterhood.