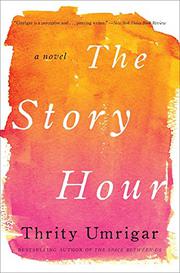 Umrigar’s (The World We Found, 2012, etc.) novel begins as a small domestic drama and develops into a forceful examination of identity, cultural isolation and the power of storytelling.

When Dr. Maggie Bose first meets Lakshmi after the young woman’s suicide attempt, she can already guess at Lakshmi’s story—abusive husband, familial separation, cultural isolation—a life in America that is so like those of the many other immigrant women she’s treated. They begin weekly therapy sessions, though Lakshmi seems unaware of the purpose—are they not new friends, simply sharing their stories? Lakshmi’s tales of her Indian village, of the time she saved the landowner’s son, her care for the village elephant, her pride at a hard-won education, are shadowed by her current life in a cold Midwestern college town. Her husband treats her with contempt, demands she work long hours at his restaurant and, perhaps worse, forbids contact with her family in India. Maggie suspects Lakshmi is less in need of psychotherapy than autonomy. Maggie and her husband, Sudhir (an Indian math professor, a fact that delights Lakshmi), begin promoting her as a caterer to their friends. Maggie teaches her to drive. Lakshmi’s independence even improves her marriage. And then Lakshmi tells Maggie a story that rewrites her whole narrative; she did a shocking thing, and for these six years in America, she has been the villain and her husband, the victim. Maggie is now repelled, though she has her own secrets. Despite 30 years of happy marriage to Sudhir, she is having a reckless affair. When Lakshmi finds out, this destroys the story of Maggie and Sudhir’s enviable marriage, and so Lakshmi takes revenge. The novel begins with a suicide attempt and ends with the regenerating possibilities of storytelling as a means of healing, of shaping identity, of endlessly re-creating the world.