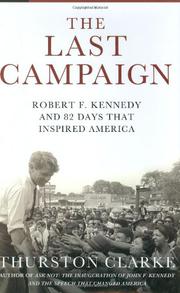 Addressing the needs of a “wounded nation”—mired in the Vietnam War, complacent about poverty and inequity—Senator Kennedy announced his candidacy on March 16, 1968, offering to lead America back to “those ideals which are the source of national strength and generosity and compassion of deed.” Clarke (Ask Not: The Inauguration of John F. Kennedy and the Speech that Changed America, 2004, etc.) follows on Bobby’s heels as he plunged headlong into his campaign, from Kansas and Indiana to Oregon and California, throwing off his brother’s mantle and becoming at last his own man. He spoke passionately, almost recklessly, inciting crowds to frenzy with his idealistic speeches about the moral shame of Vietnam, the needs of the poor and minorities and the responsibility of each American. Incorporating accounts by a gamut of reporters, politicians, family and “Honorary Kennedys,” as well as extracts from Bobby’s own stunning stump speeches, Clarke compellingly recreates this “huge, joyous adventure.” Seized by grief and guilt over his brother’s assassination and morally opposed to the war and to President Johnson’s reelection yet unable to reconcile himself to Eugene McCarthy’s candidacy, Kennedy (but not all his advisers) decided it was now or never, and his gradual but determined evolution into a fearless, formidable, winning candidate makes stupendous reading. Johnson’s decision not to seek reelection robbed him of an antagonist, but when Martin Luther King Jr. was shot, Kennedy quelled riots with his heartfelt speeches and become King’s “real successor.” Many worried that King and JFK would not be the last; Clarke quotes a heartbreaking comment from one reporter, who dubbed Bobby’s decision to campaign virtually unprotected by security as “slow-motion suicide.” The hope he inspired, though eclipsed by his assassination on June 6, still proves instructive and pertinent, especially in this election year.

Generous without being slavish, beautifully capturing Kennedy’s passion and dignity.