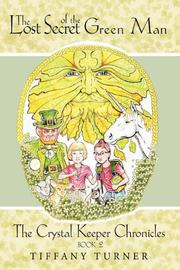 THE LOST SECRET OF THE GREEN MAN

Social studies and algebra are plenty challenging for 11-year-old Wanda, but battling a dark sorcerer–no, not her history teacher–really tests a girl’s mettle.

Other than being a budding Crystal Keeper and caretaker of the fairy world, Wanda is your standard-issue middle-schooler, spunky and timorous. Despite her neophyte status, she has been tasked with thwarting the return of Balkazaar, an evil sorcerer. But she won’t have to go it alone. A goodly cast, their characters lightly but clearly etched by Turner, help Wanda in her otherworldly progress–a unicorn, a leprechaun, a couple cat sorcerers and, of course, Brownies and Pillywiggins. The author keeps the story humming as it moves from Wanda’s discovery that new friend Eddie is also a keeper, to her passage through the fairy world, to her engagement with Balkazaar. However, the author smartly pauses long enough at certain junctures–the sudden, strange death of bees and the legend of the Green Man–to provoke readers into deeper thinking. She also inserts old chestnuts into the story with such ease that they feel fresh and may even be absorbed as life lessons–sometimes wisdom is knowing when to ask for help, how to explore one’s limits and facing fear by taking it one step at a time. It’s also worthwhile to gnaw on some plot points. â€œMany true things have been lost into the myths,” says one of Wanda’s guides about the Green Man. â€œHe has become hidden because the world has lost its respect for him.” Elsewhere, the concept of time raises some confusion–â€œThe World of Fairy has no time,” the book declares before recounting the unicorn’s efforts to fold back time and get Wanda home before her mother finds her missing–but not enough to stop readers in their tracks.

A gentle, colorful magical adventure, with enough creepiness and kindness to sustain a series.