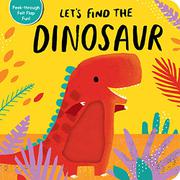 It’s a hunt to find the T. rex among the other prehistoric reptiles in this book, which combines descriptive clues, peekaboo cutouts, and felt flaps.

As readers search for the fearsome theropod, this colorful board book also introduces a pterodactyl, a diplodocus, a triceratops, and a stegosaurus. Readers lift flaps and take hints until at last they discover their quarry beneath a yellow, egg-shaped piece of felt. The felt flaps are well suited to eager little hands; while a determined-enough toddler may be able to tear a flap from the book as, say, a T. rex tears into its prey, they are certainly sturdier than paper flaps. Each cutout incorporates glimpses of the felt flap on the next page. A flash of pale-green felt viewed through a tail-shaped die cut accompanies the question “Could this be T-rex in the trees?” A page turn reveals the full, bush-shaped flap, behind which sits a smiling triceratops. Each dinosaur’s full image appears with its name and a phonetic spelling—with, oddly, the exception of “Tyrannosaurus rex.” Willmore’s illustrations are bright and inviting with pops of lime green, deep orange, fuchsia, and turquoise. Though the T. rex features described may be fanciful rather than scientific (“spiky back,” “scaly head”) in this playful context, it seems fair game. Companion title Let’s Find the Mermaid follows the same format, though the clues are clearer, making for more successful guesses.

Not much to sink one’s teeth into but toddler dino lovers won’t mind.