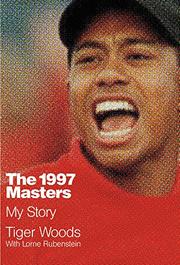 by Tiger Woods with Lorne Rubenstein

An in-depth, inside look at the legendary golfer’s historic 1997 Masters win.

Besides reliving his eventful week at Augusta National as a much-hyped 21-year-old, the usually secretive Woods (How I Play Golf, 2001), with co-author Rubenstein, reveals a great deal about himself, his family, his coaches, and his thinking as he prepared to hit key shots during his four, pressure-filled championship rounds. Thanks to prestigious amateur wins prior to 1997, Woods had already played in the tournament twice. He recounts playing practice rounds with past Masters winners like Nick Faldo, Fred Couples, and Raymond Floyd, during which he consistently asked questions about how to play the course. They provided valuable advice, especially regarding how to negotiate the course’s treacherous greens using the old balata golf ball. Woods also realized that he would need to be able to swing at less than full speed, hit the ball down, and take spin off it when needed. He then goes into great detail describing his three practice days before the tournament started, working on specific shots, understanding where to place tee shots, dealing with the media, and playing in the delightful par-3 tournament. When Thursday’s play arrived, Woods was shocked: “I would never have realized that I would shoot 40 on the front nine of the first round.” His back swing had gotten too long. Just before starting the back nine, Fluff Cowan, his caddie, helped calm him down. Woods shot 30 on the back nine, two under for the day. His final winning score of 270 and his margin of victory—12 strokes—were new tournament records. The author’s meticulous recounting of those next three days—the shots hit, the challenges met, the emotions felt—provides a rare perspective of golf played at the highest level.

An astonishing story of accomplishment that would have been invigorated by more lively, animated prose.