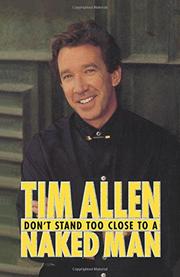 DON'T STAND TOO CLOSE TO A NAKED MAN

The spawn of Seinlanguage: shticky meditations by a stand-up comic who now stars in a top-rated television show. As Tim Taylor, Allen is the focal point of Home Improvement, but his manly-man persona plays off his wife, ``Tool Time'' cohorts, and other characters. Here we have Allen solo, closer to the stand-up mode, musing ``about many things I want to say about being a man.'' His short chapters mainly consist of riffs on his past, his humor safely in the middle American mainstream. Born Timothy Allen Dick, he learned to cope with his unusual moniker through humor and thus segues into observations genitalistic. Allen resents women saying men's cars are linked to their penises: ``What's an extension of the vagina—a purse?'' His life was transformed, he writes, by a Playboy centerfold, and he does have some wise thoughts on objectification: ``If we could have had sex with our cars and boats, it would have been a lot easier. But we'd be a smaller species.'' What should men ``look for in a gal? The answer is easy: breath.'' Allen balances such cheap laughs with some insights, suggesting that women, like men, seek glitz in a partner but eventually settle for ``the family station wagon.'' There's more: marriage, sports, and, of course, tools, leading to his innovative analysis of the impact of tool belts on butt cracks. He ends with some heartfelt sentiments on fatherhood. Allen only briefly touches on the traumas that have fueled his psyche: the death of his father in a car wreck when Tim was 11 and a prison sentence for selling drugs. (The lack of privacy in prison supplies the book's title.) More memoir and less shtick might have been a better balance here. For loyal fans, who should still be plentiful. (First printing of 500,000; first serial to TV Guide and Playboy)