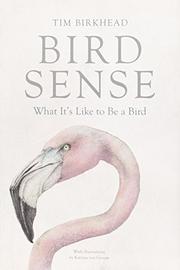 Birkhead (Animal Behavior and the History of Science/Univ. of Sheffield; The Wisdom of Birds: An Illustrated History of Ornithology, 2008, etc.) looks at the adaptive significance of bird behavior.

A lifetime spent in ornithological research and old-fashioned bird-watching has convinced the author that “we have consistently underestimated what goes on in a bird's head.” He describes how using the latest available tools, neurobiologists have uncovered new aspects of bird perception—e.g., the fact that female birds that see in the ultraviolet range chose mates on the basis of characteristics we can't directly perceive such as plumage markings. Even more fascinating, Birkhead explains that some birds “tend to use their right eye for close-up activities like feeding and the left eye for more distant activities such as scanning for predators.” Another unexpected discovery which he hopes may prove relevant to the treatment of neuro-degenerative brain disease in humans is the plasticity of the brains of birds that live in temperate regions. As the days shorten with the approach of winter, the birds’ brains shrink; conversely, increasing daylight triggers a hormone release resulting in an increase in brain size. This is correlated to the great mental activity required as new songs are acquired, mating occurs and nests are protected from predators. Another exciting discovery is the evidence of sensitive areas on their tongues and beaks, which enable them to preen in a manner similar to chimpanzee grooming. While Birkhead recognizes the problem of anthropomorphic interpretations of animal behavior, he describes a colleague's observation of birds engaging in an intense 17-minute greeting ceremony after being separated, behavior that suggested a human reunion. He admits to finding it tempting to infer that “birds experience similar pleasurable emotions.”

An entertaining book guaranteed to bring pleasure to bird-watchers that will also fascinate students contemplating a career in ecology.