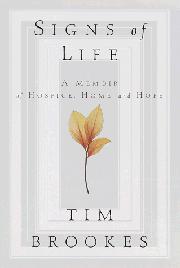 A Memoir of Hospice, Home, and Hope

The news that his mother is dying of cancer transforms a journalist's inquiry into the growing hospice movement—what might have been a full-fledged investigative report becomes a moving, highly personal memoir. Brookes, who teaches writing at the University of Vermont and whose essays are heard frequently on National Public Radio, demonstrated his skill at weaving reporting and personal experience into a seamless whole in his exploration of asthma (Catching My Breath, 1994). Here the personal story takes clear precedence. When Brookes began his research, he decided he needed to see a dead body and arranged to view an embalmed cadaver awaiting dissection in a laboratory. It was an unsettling experience. Months later, he was called to the bedside of his dying mother at a hospice in England. Between these two charged events, Brookes learned a great deal about life at its extreme, the needs of the dying, our fear of death, the differences between suffering and pain, the limits of palliative care, and the gap between hospice philosophy and real-life practice. An exile, he also learned a great deal about what home and family meant to him. From time to time, there's a hint of what the book might have been had circumstances been different. As a reporter, Brookes looks at the hospice movement with a far more critical eye than hospice doctors do in their own writings (see Michael Kearney, Mortally Wounded, p. 1996, and Ira Byock, Dying Well, 1996). Noting its persistent confusion over the nature of its spiritual mission, he comments that the hospice movement's ``graceful New Age ecumenical dance'' is likely to be pulled apart by the stronger forces of medical science and established religion. An affecting memoir by a talented writer that leaves the reader regretting that he did not probe even more widely and deeply into the nature and role of the hospice.