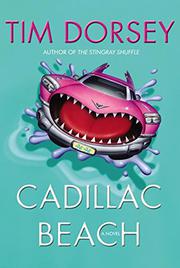 Back in the swingin’ ’60s, when South Beach was still low-rent housing and the Fountainbleu in the full flower of its glory, Serge’s grandpa Sergio got a hold of a dozen of the diamonds heisted by Murph the Surf from the Museum of Natural History. Now Serge is out to recover the ice and prove that granddad’s subsequent suicide was actually murder. He recruits Lenny Lippowicz, who between tokes drives a limo for Serge & Lenny’s South Florida Experience, a tour that showcases the side of Miami nobody’s seen—or wanted to. But when four customers, Brad, Keith, Rusty, and Doug, make an unscheduled stop at the airport to play a prank on fellow conventioneer Dave and mistakenly shoot mobster Tony Mariscano, the hunters become the hunted. Joined by City and Country, two hot chicks last glimpsed in Hammerhead Ranch Motel (2000), and New York sportscaster Mick Dafoe, whom Serge kidnapped in hope of bagging someone to ransom back to the mob, the growing entourage runs from the Mafia and after the diamonds, meanwhile making all the South Florida Experience’s scheduled stops.

Serge’s uncharacteristically sharp focus takes some of the edge off as Dorsey’s freewheeling style, still gloriously manic, is compressed into a mere two dimensions.