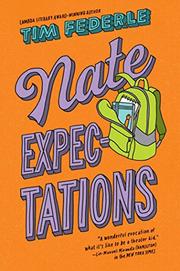 Sadly, Nate’s return is not off to a promising start. His world is breaking apart. The not-really-a-hit E.T.: The Musical did not pick up any Tony nominations, and as Broadway babies know, this usually signals the end of most musical runs. As the show enters its final days, Nate must come to terms with returning home to Jankburg, Pennsylvania, saying goodbye to his aunt and NYC–guardian, Heidi, and leaving his crush (and make-out buddy) Jordan, the star of the show. Things may not be completely bleak, however. Once home, Nate is reunited with his best friend, Libby, and begins his new quest: high school, where his adventures include self-discovery, musical theater (duh), crushes, and coming out. Federle is in fine form here, and readers will laugh out loud at Nate’s adventures (and dramatics). The storyline may have matured along with Nate, but the tone is still fresh, irreverent, and over-the-top. Some subplots may be a skosh unrealistic—such as Nate’s near-total acceptance in his new school—but readers will likely forgive a point or two as the teen thespians mount a musical adaptation of Great Expectations. As enjoyable as Nate may be, the standout character of the book is Libby, whose Tina Fey–like humor and Oprah-like efficiency will have readers in stitches.

An exceptional swan song for a beloved character.