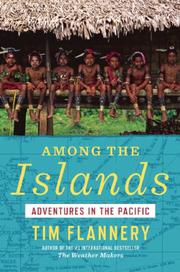 Adventures in the Pacific

From the tides of the South Pacific to the impossible peaks of jungle islands, one zoologist sets out to find the living riches of the planet.

Flannery (Here on Earth, 2011, etc.) is not just an internationally acclaimed zoologist; he’s also an adventurer and storyteller who has discovered creatures no other human has seen. His latest record of exploration traces the beginnings of his career during the 1980s and takes him through more than a decade of study in remote islands of the South Pacific. There, he encountered untouched environments and their native inhabitants, and he renders these lost worlds in full color. Often humorous, he provides anecdotes of crocodiles waiting for their prey, mountains of bat feces and islands crawling with giant rats. Flannery’s writing is generous and exuberant. His enthusiasm for the subject is contagious enough to infect even the least science-minded of readers, but you can be sure his aim is not simply to entertain. “To some,” he writes, “our adventures might seem to be nothing more than a romantic frolic. After all, why should anyone care about an obscure creature found only on a distant island? Would the world lose anything with its extinction?” The answer is most emphatically yes, and the author situates obscure animals in a worldwide perspective that entwines all living things, including humans, together. Flannery’s research efforts contribute significantly to continuing conservation efforts, and he is clearly grateful and appreciative to be a part of it.