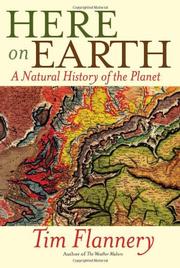 A Natural History of the Planet

What is the nature of Earth, asks the author, and how flexible and resilient is it? What course will civilization take relative to ecological systems? Flannery suggests that two tendencies have been spawned by evolutionary theory: Medean, which hypothesizes that our selfish species will self-destruct by exploiting resources to the point of ecosystem collapse; and Gaian, which states that Earth is a self-regulating, living organism capable of a comfortable steady state, and that humans can learn from their mistakes. Flannery is one of those rare science explicators who combines both graceful style with utter cogency. When he throws his hat in the ring with the Gaians, which seems like a long shot in the face of all the ruinous environmental behavior exhibited by humans—and which Flannery explains in detail—readers will happily join him there, for he has plenty of evidence of the natural world, humans included, working in cooperative coevolution: interactions that can “lead to the development of ever more intricate relationships, which can, in some circumstances, create a sum of biological productivity that is greater than its parts.” Flannery smoothly moves through time and space, rooting out countless instances of cooperative, sustainable behavior—what could be called the ecstasy of the commons—tempered by an ingrained biophilia and a more capacious notion of self-interest.

A lyrical, informed investigation into the human as ecological agent, and a provocation to act responsibly.