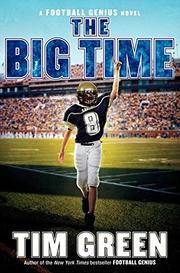 From the Football Genius series, volume 3

Twelve-year-old Football Genius Troy is astonished to see the father he's never met at his coach's house, interrupting their end-of-season victory party. He's a lawyer and agent, and he'd like to represent Troy in contract negotiations to maximize the return on Troy's remarkable ability to predict football plays. This installment of Troy’s story is more focused on sports dealmaking and Troy’s longing for a strong connection with his dad than on the sport itself. Most of the action centers on the trust issues that are generated among his family and friends as questions around his father’s motivation emerge. Troy’s dad is aligned with a shady celebrity in the music business, and the titular "big time" refers to the buckets of money that could be Troy's if he follows his father's advice. Green proves to be as engaging about the business of sports and the kind of cheating it engenders as he is about the game itself. Less satisfying is how small a role Troy’s friends play, although they do give him an assist at key moments. Still, a solid entry in the series. (Mystery. 8-12)