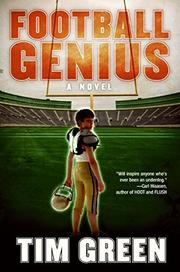 Sixth-grader Troy White is a one-of-a-kind athlete with the ability to predict which plays any football team will run even before the ball is snapped. However, his mental talents don’t help him crack his youth-league team’s starting lineup (the coach plays his own son at quarterback). Troy dreams of pitching his talent to his beloved Atlanta Falcons, helping them post a winning season. Seemingly an after-school-special waiting to happen, and marked by cinematic writing, this feel-good story has a place in libraries fielding requests for clean and uplifting stories. Touching scenes of underdog Troy wishing he had a father to help him are contrasted with very realistic on-the-field football action, which is not surprising considering that the author is a former NFL player. Many actual players’ names are dropped throughout the story but some, like Randy Moss, may soon switch teams. More than a sports story, romance pops up as Troy nudges star Falcon linebacker Seth Halloway to date Troy’s mother. This light and fast-paced story will appeal to the tween crowd. (Fiction. 10-13)