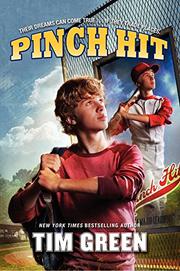 Trevor’s a Hollywood star wishing he could play baseball like a real kid, and Sam’s that real kid, whose father is unsuccessfully peddling his script. The credulity-straining plot is not new, but Green attempts to make this fantasy seem plausible by having the boys discover quickly that they may be identical twins separated at birth. Female teen heartthrob McKenna acts as Sam's advisor in Hollywood, leaving Trevor to negotiate Sam’s trailer-park life on his own. Sam is a great baseball player, of course, and Trevor’s main challenge is fulfilling Sam's coach and teammates' reasonable expectations. Trevor's distracted and distant parents make Sam's success at his half of the fraud a little more believable, but that he would wow the director on his first take in the blockbuster Trevor has been filming is hard to take. As is Trevor’s birthday present of playing baseball with the Los Angeles Dodgers and the fake birthmark that distinguishes the two supposedly fooling a makeup artist on the set on a daily basis. There’s plenty of baseball action to distract from the flimsiness of the plot, which ends on such an unlikely note that there must be a sequel planned. Sports fiction seldom branches out into the movies, which may broaden the audience a little.