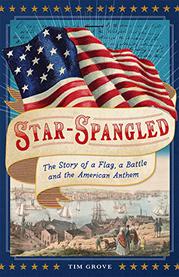 The Story of a Flag, a Battle, and the American Anthem

An in-depth look at the events that led to the connected stories of the United States flag, the national anthem, and an important military victory.

The United States was a vulnerable young nation when the War of 1812 plunged it into conflict with Great Britain. The British navy targeted the Chesapeake Bay and the city of Baltimore for attack, both for its proximity to Washington and the shipbuilding that occurred there. Grove provides comprehensive background about both nations’ underlying military strategy. The actual story about the commission of the flag that flew over Fort McHenry is explored in great detail, as is the confluence of events that found Maryland-born attorney Francis Scott Key on a ship during battle, the aftermath of which inspired him to write the words that became the national anthem. Grove provides a page-turning narrative that enhances the familiar aspects of this story and fills in those little-known areas. He paints a full picture of Key’s attitudes toward slavery as well as of Mary Pickersgill and how she came to take on the task of making a somewhat unusual flag. In addition to details about shipbuilding and military planning, he weaves in the role of enslaved fighters who ran away to the British, who promised freedom, forming the Colonial Marines. Generous archival illustrations and the rich and varied backmatter make this a boon for fledgling historians.

A well-researched and spirited slice of history.