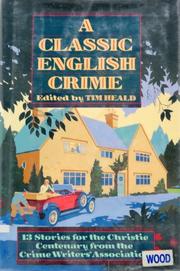 A middling-to-poorish collection of 13 new detective stories, each set in England between the wars, to celebrate Agatha Christie's centenary. Most of the Crime Writers Association contributors, hamstrung by the conventions of the formal short story of detection, offer transparently obvious puzzles (Margaret Yorke, David Williams, Celia Dale) or slender tales self-consciously laced with parody (Julian Symons, Simon Brett, and editor Heald), though there are welcome exceptions: Susan Moody charmingly reworks an old plot device; Peter Lovesey provides some nostalgic byplay between his two police officers; Catherine Aird offers a Sayersesque explanation of poisoning from across a dining table; and—in the three best stories—H. R. F. Keating, Paula Gosling, and Robert Barnard all show just how much can be done by writers who approach this formulaic genre with conviction. For the most part, though, there's a sad lack of the ingenuity, the grasp of the rhetoric of Golden Age plotting, that made Christie inimitable.