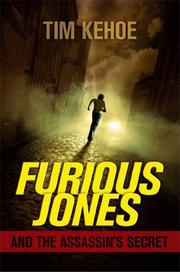 FURIOUS JONES AND THE ASSASSIN'S SECRET

The teenage years are usually a time of self-exploration, but for Furious Jones, it’s a time to explore his family history.

Furious (yes, that’s his real name) has been living with his chief-of-police grandfather in peaceful Connecticut since his mother’s recent shooting death. When he hears that his father, a famous author of best-selling spy novels, is giving a speech in New York City, Furious slips away to be there. Hoping to reconnect with the only parent he has left, he instead witnesses his father’s murder, in a manner uncannily like his mother’s. It turns out his mother had been an assassin for the CIA, and Furious’ father’s books were based on his mother’s exploits. Now the family has been targeted by the mob, and it appears the CIA may not have their best interests at heart, either. Furious has no choice but to go on the run when his grandfather too is murdered: It’s clear that Furious is next. Working from clues planted in his father’s last book, the 12-year-old heads to the small town in the Midwest where his mother was gunned down, there to begin his quest for revenge. Credibility and questions of morality take a back seat to action as Furious dashes from one plot twist to the next, sparing little time for introspection.

Readers caught up in the action will not mind the gaps.