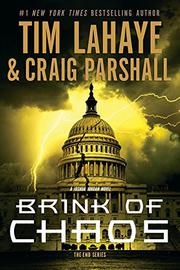 If you use Jesus as a character in a novel, do you have to pay him royalties?

It’s not spoiling the story—it’s all right there in the latter pages of the New Testament—to reveal that in LaHaye and Parshall’s (Thunder of Heaven, 2011, etc.) latest exercise in fundamentalist fiction, the brink of chaos of the title inaugurates a time when every good person on the planet can be found “worshipping and singing to the One who had ransomed them. Their Champion. Their Lord.” There’s no need to ask who the capitalized Person in question is. If you’re one of LaHaye’s legion of followers, then you won’t need to ask who supersecret agent Joshua Jordan, he of the double Old Testament moniker, is either. Jordan’s brief in this latest is to thwart the ambitions of the very, very bad secularists in power (“Let me tell you, those folks in power, including our president, really are bogeymen”) and the even worse secularist who is rising to attain world rule: “His global regulations against climate change,” the authors tell us, “have industries around the world being monitored by his environmental police.” Of course, in the fun worldview of the apocalyptic set, there’s no such thing as climate change, and anyone who hampers the desire of a corporation to do whatever it wants to is an agent of the Antichrist. When Jordan isn’t chasing after this impeccably groomed baddie, he’s jetting off to the Middle East to prep the world for the end of days. That’s work that can make a person tired, and Jordan’s wearisome banter is a mark. As with formula fiction since before the dawn of time, no one in these pages ever speaks like anyone in real life does. But why would they need to, when they’re floating rapturously up into the clouds?

A dictionary-definition specimen of preaching to the choir, and one that begs yet another question: Is it unkosher to be so ham-fisted?