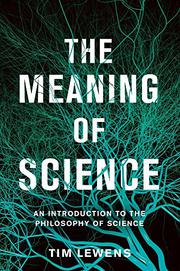 THE MEANING OF SCIENCE

An Introduction to the Philosophy of Science

“What is the meaning of science? This is not a question that science will answer on its own.” Look closely at the formulation as Wittgenstein might, and you have a justification for why philosophers of science should draw a paycheck—after all, the scientists can’t tell you what it all means, and someone has to. That’s all to the good, but some of what Lewens explores isn’t really the province of science. The ancient question of whether humans possess free will is not one that science as such bothers with, though it has some bearing on cognitive research. The author’s answer is characteristically hedged. “Neuroscience,” he writes, “has not yet shown freedom to be an illusion.” Not yet, but come the singularity, watch out. The issue of what constitutes an appropriate problem for science is material, for, as Lewens notes toward the end of the book, there is much debate among philosophers of science—less among scientists, of course—whether “the facts revealed by chemistry, biology, and psychology are all, in some fundamental sense, facts of physics.” To his credit, on the matter of domains of inquiry, the author notes that science can generally do without theories of “human nature,” which again fall to the social sciences and, yes, philosophy. At its best, the book raises provocative questions, but all too often, those questions are—well, in the form of questions, too many piled atop one another: “What do we mean when we say that a theory is simple? Do we mean it is easy to work with? Do we mean it asserts the existence of very few new theoretical entities?” The constant grilling is an annoying professorial tic, and one wishes for less of it.

Readers seeking a more humane, more direct orientation would do well to dust off Jacob Bronowski’s The Ascent of Man (1974), dated but still valuable.