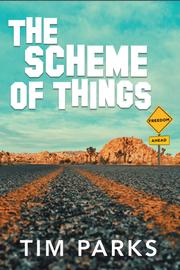 The Scheme of Things

A debut coming-of-age novel about the lengths to which people will go in order to discover their true selves.

Parks’ novel chronicles the story of narrator Henry Dodge, a preteen living in suburban Southern California. The book begins in 1985 with him living at his parents’ home, constantly afraid of his sweet mother, athletic brother, and abusive, alcoholic father discovering his biggest secret—he’s gay. Henry spends much of his free time alone, drawing nude male figures, skimming through Playgirl, and obsessing about his all-consuming crush on his new, older neighbor, Danny Woodson. He regularly grapples with his secret and his constant feeling of being an outsider. He finally awakens to his sexuality at age 16 when he begins a physical relationship with an older male colleague at Lavar’s BBQ restaurant, which inspires a series of events that ultimately leads him to come out at school—and also to his parents. Afraid of the backlash, Henry runs away to Los Angeles, eager to find Danny Woodson. On the way, he decides to shed his identity as Henry Dodge and become a new person: Billy Collins. What “Billy” finds when he arrives in Los Angeles, however, isn’t the stuff of fairy tales; he quickly gets mixed up with a rough crowd of drug dealers, pimps, and porn producers. He must then navigate through the drama of his new life. Parks’ story is an often touching tale of a young man’s self-discovery. It’s long and rambling at times and packed with gratuitous sex and violence. However, the author’s prose is also full of funny quips and puns: “Sooner than I knew it, the summer had flown by, the greenhouse was erected, and so was I on a nightly basis.” Henry, as the narrator of the story, is also likable and tender, which makes it easy for readers to root for him.

An action-packed, if sometimes over-the-top, story about a young gay man’s desire to join a community that accepts him.