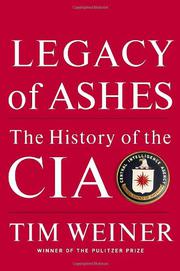 The History of the CIA

The CIA started off on the wrong foot in 1947 and never regained it, maintains Pulitzer Prize–winning journalist Weiner (Blank Check, 1990, etc.).

Presidents Truman and Eisenhower believed intelligence could prevent another Pearl Harbor by uncovering Soviet intentions, but the CIA never predicted an important Soviet or terrorist move, the author avers. The agency devotes most of its budget to covert operations, most of them bungled. Aided by an avalanche of documents declassified since 2000, Weiner offers a dismal litany of failed operations the agency did its best to cover up. Thousands of potential insurgents or saboteurs sent into Russia and its satellites, North Korea, China and Vietnam were quickly eliminated. Clumsy attempts to overthrow unfriendly (i.e. neutral) governments usually failed. Two widely praised successes—the 1953 Iranian coup that placed the Shah on the throne and the overthrow of a leftist Guatemalan government in 1954—are now considered mistakes. Suppressing news of the 1961 invasion at Cuba’s Bay of Pigs was impossible, but even that disaster did not put an end to covert operations, because presidents valued them. Readers will wince at the CIA’s involvement in plots to murder Fidel Castro, the brutal 1973 coup in Chile and massive spying on American protest groups. The Soviet collapse, unpredicted as usual, was a blow from which the agency has not recovered, states the author. The military has taken over much responsibility for covert action, with no greater success. Though highly critical of the CIA, Weiner makes two important mitigating points. First, democracies are not obligated to fight fire with fire: CIA money won more hearts and minds than pseudo-KGB ruthlessness, and KGB debacles contributed mightily to the USSR’s decline. Second, many presidents demanded bad intelligence. Chief executives either ignored or angrily demanded recasting of such good information as the reports that North Vietnam was nowhere near defeat, Soviet missile capacity was overrated and evidence for weapons of mass destruction in Iraq was feeble.