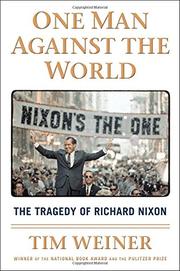 ONE MAN AGAINST THE WORLD

The Tragedy of Richard Nixon

“The press is the enemy. The establishment is the enemy. The professors are the enemy.” So said Nixon, who never minded making room for one more name on his fabled—though very real—enemies list. It speaks volumes about Nixon that there is still more to learn about him, 40-plus years after Watergate. It speaks further volumes that what we are learning is even worse than what we knew: John Dean’s The Nixon Defense (2014) just scratches the surface. Enter Pulitzer and National Book Award winner Weiner (American Studies/Princeton Univ.; Enemies: A History of the FBI, 2012, etc.), who is particularly interested in Nixon’s fraught efforts to disengage from Vietnam while not appearing to abandon an American ally. “Why not give this up?” asked Chinese leader Zhou Enlai, who encouraged Nixon to get out, promising that if the war were to continue, China would be honor-bound to help its communist neighbor. Alas, writes the author, Nixon and the ever sycophantic Henry Kissinger could never figure out how to pull that off. Weiner’s findings, drawing on the entirety of Nixon’s secret tapes and other documents, are certainly newsworthy: Nixon, for instance, busily selling ambassadorships, wanted to dismantle not just the State Department, but effectively the whole of the government, filling its ranks with loyalists. So bent was he on this that he put into motion a plan to have his entire Cabinet resign the day after the election, with the next step to “rebrand the Republican Party in coalition with conservative Democrats, create what he called a New Majority to last until the end of the twentieth century, and destroy the remnants of LBJ’s Great Society once and for all.”

That project continues, of course, in different hands all these years after Nixon’s coverup of a coverup. No one who reads this incisive book will be nostalgic for Nixon, no matter how disastrous his successors.