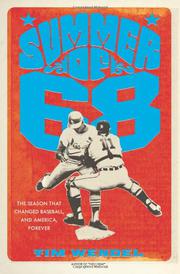 During one of the most tumultuous years in our history, a remarkable baseball season unfolded.

In 1968, most baseball players had to work a second job to make ends meet. There were no wild-card teams or division winners. That year the Detroit Tigers became only the third club in history to rally from a 3-1 deficit to defeat the powerful St. Louis Cardinals in the Fall Classic. Showcasing this looming match-up, Wendel (Writing/Johns Hopkins Univ.; High Heat: The Secret History of the Fastball and the Improbable Search for the Fastest Pitcher of All Time, 2010, etc.) foreshortens the season by focusing on the stories of individual Tigers Gates Brown, Willie Horton, Dick McAuliffe and, especially, pitchers Denny McLain, who won an astonishing 31 games, and Mickey Lolich, the Series MVP. The author also looks at Cardinal stars Lou Brock, Curt Flood, Tim McCarver, Orlando Cepeda and especially pitcher Bob Gibson, among the game’s all-time greatest. He charts the thrilling Series game by game. More intriguing, though, is the season’s unique backdrop: the “Year of the Pitcher” in baseball and the national turmoil surrounding the sports world. In addition to McLain and Gibson’s heroics (both won the Cy Young and MVP awards), the season saw five no-hitters (including a perfect game by Catfish Hunter), a consecutive game strikeout record by Luis Tiant and an unprecedented scoreless innings streak by Don Drysdale. Meanwhile, the country was falling apart. Urban riots and massive antiwar demonstrations helped persuade LBJ not to run again. By the time the Chicago Democratic Convention exploded in the streets, Martin Luther King Jr. and Robert Kennedy had already been assassinated. Wendel touches briefly on how the year agitated other sports, but he focuses on the baseball story and the athletes accustomed to ignoring the outside world. They found that impossible to do in the chaotic year of ’68.

An appealing mix of baseball and cultural history.