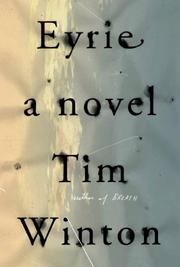 An odd troika stumbles through the decadence of a world on the verge of collapse in Winton’s (Breath, 2008, etc.) resonant, oddly cheerful yarn.

Tom Keely is a mess. A one-time environmental activist, he’s failed at that, and spectacularly. He’s failed at marriage, at fatherhood. Now, living high up in a seedy apartment tower on the farthest edge of western Australia, he has recurrent fears of falling out the window and off the face of the Earth—small wonder, given his staggering chemical diet. Winton’s narrative opens with a king-hell hangover, Keely lying as still as he can in the growing heat of morning, contemplating a stain on the rug: “He had no idea what it was or how it got there. But the sight of it put the wind right up him.” Things don’t promise to get much better for him in that hellish tower among the “stench of strangers” until, hitherto oblivious, he discovers that a neighbor is someone he vaguely knew in his younger days, way back when things were good and promised to get better. As with Tom, the years have not been kind to Gemma Buck, once quietly attractive, now guardian to her grandson, a spooky little kid given to apocalyptic visions and to saying things such as “The birds in the world will die....All of them, the birds. They die.” If young Kai’s dreams are haunted by extinction and doom, he’s got cause: Mom’s a jailbird, dad’s a thug, and they’re hitting Gemma up hard for money she doesn’t have. Dyspeptic in a way that would please a David Lodge or Malcolm Bradbury, Tom unsteadily tries to help, finally given a mission to fill his idle, meaningless days. But is he Kai’s rescuer, or is Kai his? Sometimes brooding, always superbly well-written, Winton’s story studies family—even a family that is as postmodern and anti-nuclear as our hapless trio—both as anchor to keep the ship from drifting away and anchor to keep whomever it’s tied to submerged.

Another exquisite portrait of troubled modern life from Winton, who solidifies his reputation as one of the best writers at work in Australia—and, indeed, in English—today.