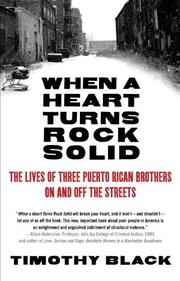 WHEN A HEART TURNS ROCK SOLID

A sociologist examines the lives of marginalized Puerto Rican youths in Springfield, Mass., connecting their stories to the economic, cultural and political factors that shaped them.

Black (Sociology/Univ. of Hartford) met the Rivera brothers—Fausto, Sammy and Julio (all pseudonyms)—in 1990 and followed them for 18 years. Besides the brothers, the author also includes their parents, their partners and children and men in their neighborhood, many of them drug dealers. Black builds a picture of marginalization, racism and poverty. Economic statistics, tables and maps provide background, and generous excerpts from his taped interviews provide color. The author delves into how these youths fared in school, revealing both their personal failures and the flaws in the bilingual education system that led to their giving up and dropping out. Springfield was then the center of the drug trade for western Massachusetts, and Sammy was the first of the Rivera brothers to become involved in it. Fausto’s life took the common path from school to the street to prison, where he spent seven years. Both men became hooked on drugs. Julio, however, left the gang life to become a truck driver, and with a working wife was able to buy a house and edge upward toward the middle class. Black’s close relationship to the boys often entailed mentoring, urging them to complete their schooling, helping them with documents, appearing for them in court, visiting them in prison and getting them into rehab. The author’s clear portraits of his subjects, his empathy for them, his pride in being accepted and even sometimes protected by them and his anger about the institutions and policies that have shaped their world give an immediate, powerful human dimension to their stories.