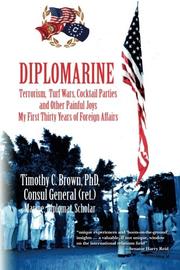 Veteran diplomat Brown (The Real Contra War, 2001) provides a revealing look inside the mysterious world of foreign service.
For more than three decades, the author traveled the globe in the service of the United States—first as a Marine, then as a Foreign Service officer, with stops in Latin America, Southeast Asia, the Caribbean, Europe, the Middle East and that most dangerous of locales: Washington, D.C. For most of his journey, his Costa Rica–born wife, Leda, and their four children accompanied him. Brown summarizes his job thusly: “[I]mplementing foreign policies in the field…is exceptionally complex, always challenging and, on occasion, very dangerous.” His career coincidentally began and ended in Nicaragua, where he started as an underage soldier and finished as the head of a secret State Department office aiding the Central American country’s rebels. As Brown enjoyably describes, a diplomat’s job required making the right connections to get things done, but there was a healthy dose of happenstance as well. He stuffs his memoir with memorable anecdotes, and even his chapter headings reveal the human foibles that were often central to political decisions (“Whore Houses, Labor Relations and Coca Cola”; “Fat Colonels, Mau Maus and Chilean Blonds”). However, he never makes his own personal political leanings clear, and he says that’s the way it has to be for a Foreign Service officer: “Republicans think all Foreign Service professionals are left-wing liberals, if not closet Marxists, and most Democrats are certain they’re all right-wing reactionaries, if not out-and-out fascists, so neither believes they’re to be trusted.” The author also uses his collection of photos and memorabilia from his many years of service to help bring his reminiscences to life. Brown is a natural storyteller, and he skillfully shows readers what a truly remarkable career in the diplomatic corps looks like.
An engaging, personal peek into U.S. foreign relations.